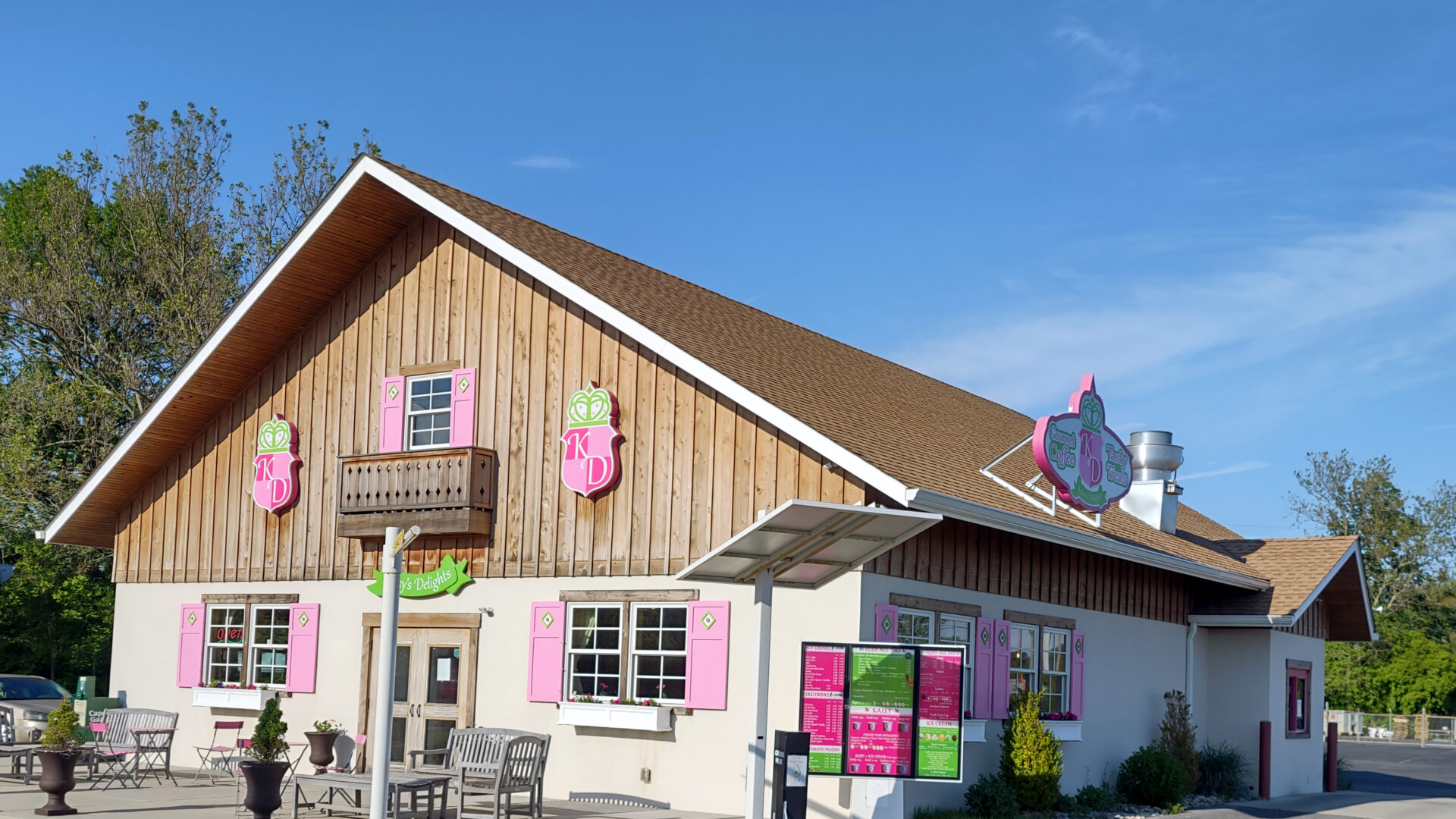 The Kaisy’s Delights flagship restaurant in Lewes is actually the second location we assisted the owner’s with. The first was the Rehoboth retail store, but that was mostly a function of timing. The Rehoboth Beach location was ready to go as soon as we finished the designs as a fit out. However, this location was intended to house the offices and even an apartment.

The clients built on a prominent site at the intersection of three streets as you come into town. Our civil engineer got the approvals from DelDOT, and Sussex Conservation District to redevelop the site from a greenhouse/florist. However, that process took a lot longer, so this was built second. Unfortunately, part of that process drastically limited the area we had to work. This lead to a decrease in project scope. In the end, we had to lose the second floor, the apartment, and much of the offices.

The exterior was intended to be very simple. A rectangle with a large overhanging roof, similar to an Alpine Chalet style. We chose a natural board and batten look for the gables. This is appropriate for the style they were trying to evoke, however, it is slightly expensive to install. Even worse, it’s very expensive to maintain. So, to keep costs down, we went with an Exterior Insulation and Finish System. This system is much easier to maintain, provides a neutral base to contrast, and improves the building’s thermal performance.

In fact, the simplicity of the lower level contrasts well with the intricate detailing of the balcony and bright colors of the shutters, logos, and flowerboxes. The flowerboxes were an especially important request by the owners to evoke Alpine spring in the mountains. Therefore, when they painted a mural of flowers on that neutral but highly visible wall, it was no surprise.

We had worked out the scheme for the interior as part of their branding at the first location. The bright pink is memorable and similar to Owen’s Corning, part of how you know where you are. To invoke the time period and location of the late Austro-Hungarian Empire, the clients chose pressed tin style ceiling and interior wood work. This ties in with their foundational story of the Kaisy, their signature treat.

In the end, the client achieved the flagship restaurant that they were looking for. It strongly ties into their brand and provides iconic exterior and interior elements. They can use these elements as they expand their footprint across the state. They also have a small kiosk already in Milford at the new hospital complex and we expect to help them again with additional buildings and fit-outs as they grow.